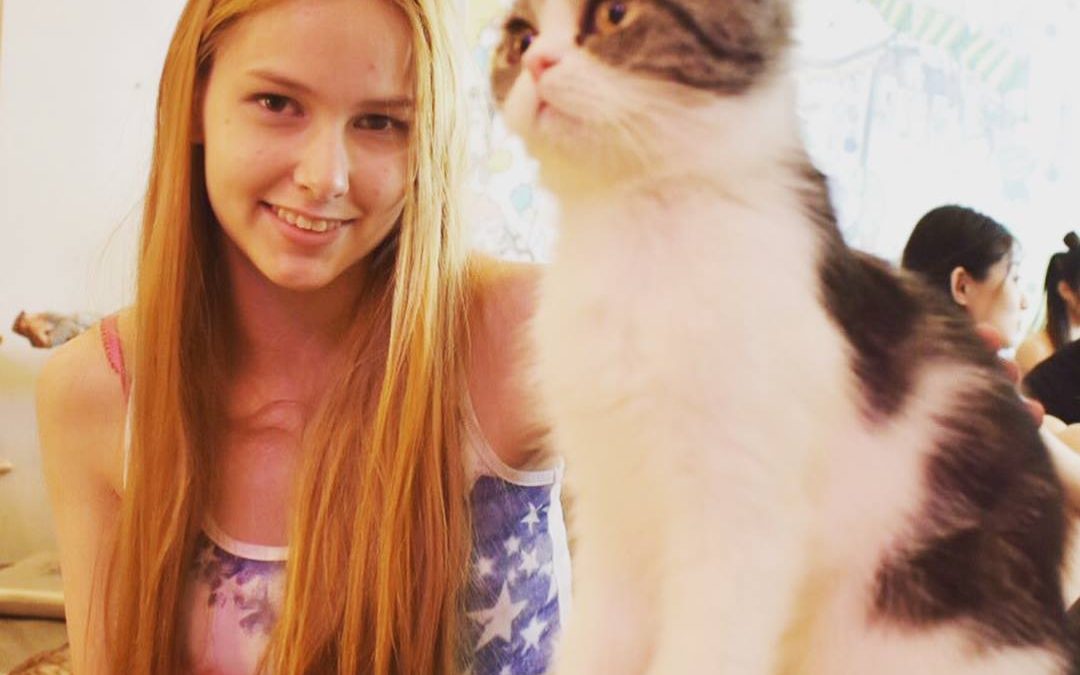 Breakfast!- Yea I missed it again. Poom’s family usually eats pretty early, and my jet-lag made me wake up around 10:30. Today Poom and I mostly sat around together and talked, we didn’t go outside anywhere today, it was very rainy most of the day. Poom and I planned some of our trip to Malaysia and Krabi next month. We also watched The Blind Side, since Poom hasn’t watched it before. I’m still getting used to eating rice at every meal again. It is definitely not easy to get used to.

So since I am still crazy jet lag, I have been awake since 3am, and couldn’t go back to sleep. So I just decided to get ready and talk to family on FaceTime for a bit. At 8am I am finally able to get Poom out of bed and we go eat breakfast. This morning I got to eat boiled chicken and steamed rice. It tasted a lot like regular food at home, and wasn’t spicy so I really enjoyed this meal. After breakfast I did the dishes, and started to unpack more of my things. Also one of my favorite parts about being here so far is that Poom’s family is fostering 3 little kittens! My family has fostered a number of kittens, so this is really enjoyable for me. I get to feed the cats and play with them a lot each day. So after I play with the cats for awhile I take a nap, and when I wake up it is already lunch time. I feel like I am always eating when I come here haha. I ate fried rice for lunch, then get ready to leave. We leave the house around 2pm, and we stop in Chonburi at Central Plaza and I finally get to eat Swensens! Swensens is an ice cream place here and I always get a banana split! After we left the mall we head to Bangkok. I fell asleep in the car, and woke up in traffic. We didn’t arrive at our destination until about 6pm. After we got here we went to 7-11 to get some dinner and some snacks and I fall asleep pretty early.

Buenos Dias Bangkok! Poom is gone for a lot of today, he has a college activity to go to. So that means today is my first day being alone here! I am actually pretty excited haha! I looked online at some cool places I want to go, so we’ll see how courageous I am to leave the apartment haha. So I left Poom’s dorm around 10:30 and ventured out to the BTS station. BTS in Thailand is what people call their monorail system. He explained to me to walk down the street and cross it to get to the station. Right away I follow the wrong person who is going in the wrong direction. So I follow another person back to the right station. I am pretty good at using the BTS here, and the map isn’t too tricky to follow. I get to MBK, which is one of Bangkok’s biggest shopping malls. It has 7 floors which contain a movie theater, arcade, bowling alley, escape room, spas, stores and lots of food. When I get here I remember I need to exchange money, so I head to find a place to do so. The best place to exchange money in MBK is on the 4th floor in the Money World section. After I exchanged money, I went to walk around and find something to keep me busy until Poom met up with me later in the afternoon. I walk past a massage place and they had a body massage for an hour for about 8 U.S dollars. So I got a massage. The guy who gave it to me didn’t speak English so we were awkwardly exchanging smiles, laughs, and the small Thai words I know. Poom later told me this was pretty expensive, and I could get it cheaper outside of the mall. After I got a massage I went to find some food, so I went to Swensens to get ice cream! When you walk into Swensens the first thing they do is bring you a cup of water and the menu. So since I always get the same thing, Poom made it easy and wrote my order in Thai, in the Notes section of my phone. That way it would be easier to just show them and not have to try to explain what I wanted. The waitress served and delivered 3 other tables ice cream before I even ordered, and at this point I am getting pretty annoyed. I knew she was hesitant to take my order in English. When she finally came to my table and figured out I already had my order ready in Thai, she was very surprised and I got my ice cream about 2 minutes later. After I got Swensens I met Poom at KFC and we ended up eating at McDonald’s. We walked around Siam Paragon- another huge shopping mall. And we ended up going home in the rain!

Today is the day I have been waiting for! (Not so much for Poom). We are going to a cat cafe! I’ve been asking to go to one for awhile now, and today we are finally going. We found out that there is a cafe really close to our apartment, so maybe this will be my new regular hangout haha. First we go eat lunch at Seoul Chon. It is a Korean fried chicken place close to the Ratchathewi BTS, also close to the cat cafe we are going to. The walk from the BTS to the cat cafe is very short, less than 10 minutes. The cafe we went to is called Caturday Cafe. (I will probably make an entire post about the cafe with more pictures and details for anyone interested coming here). But anyways the cafe was super fun, Poom even liked it haha. We did some more walking around Siam Square for awhile and got rained out again..

Since yesterday was all about things I wanted to do, I let Poom decide our destination for today. He chose Asiatique for us to go to today. Asiatique is a market where you can buy lots of different clothes, food, and Thai souvenirs and apparel. They also have carnival games you can play, and a Ferris wheel you can pay to ride. FYI they charge foreigners more to ride the Ferris wheel than they charge Thai Nationals. (This is very common for a lot of tourist attractions in Bangkok and throughout Thailand.) So when we buy tickets for these things, Poom goes by himself to buy 2 tickets, and I don’t stand next to him or associate with him. Then he just gives me the ticket. This works most of the time for us. The ticket was 300 baht, so around 10 U.S dollars per person. To get to Asiatique we took the BTS from Ratchathewi to Sapan Taksin station. When you get to Sapan Taksin, you get down from the station and there is a free ferry ride to take you down the river to Asiatique. There is an option to pay money to get in a “fast” lane.. but do NOT do that. We all ended up fitting on one boat. The boat ride is about 10ish minutes, and is a pretty nice place to take some great pictures of Bangkok. Overall we both really enjoyed Asiatique and it was a very easy location to get to. The food at Asiatique is great and has a wide variety from American food like KFC, to Thai food, and Vietnamese food too. This is an outside market, so not every place is perfectly air conditioned, and anyone wanting to travel here should be aware of rainy conditions.. and this month it rains a lot!

This is another Poom Pick Day. He has wanted to come here and try the food for awhile so we wanted to give it a shot! Poom spent a lot of time today researching the best places to eat in Chinatown, so I think we are well prepared. Chinatown is not close to where we are, so the commute was long. We took a bus to Victory Monument first, then had to find a different bus to take us to Chinatown. In Thailand the bus system is very cheap and useful! You don’t have to know a lot of Thai to understand everything. But just know, the bus driver and the person that takes your money usually speak little to no English. There is a price difference between the two bus types. An air bus, which means no air conditioning, it just has the windows open, will cost less than the air conditioned bus. Also know that while riding the bus it is considered rude to use more than a 100 baht bill. The person on the bus who takes money might not always have proper change if you give them 1,000 and your cost is 7 baht. So using coins and 20 baht dollars are the way to go. Once we get to Chinatown it is already almost dark, its like 6:30 haha. At this point I really don’t want to waste time looking for food I just want to eat. Luckily I picked on of the well known restaurants Poom wanted to eat at. Surprisingly I actually really enjoyed the food, even though it was a bit spicy. Poom really liked his food too, he had rice with duck I think. It tasted sweet like cinnamon and I didn’t like that one haha. After we eat there we go into 7-11 to get cold air, because it is way too hot outside. There were about 30 other people in there that had the same idea haha. Poom told me when we got here we HAD to get the special bread they have here. I noticed before the place even opened there was a line starting to form. To order from this place you have to take the order card and fill it out, they have it written in Chinese, Thai, and English. We ordered a chocolate, strawberry, custard, and sugar butter breads. They all tasted really amazing! But they were quite messy to eat without sitting down, and it is extremely hard to find a place to sit here. After we finish the bread we are both so tired so we head back. We waited and waited for a bus, but none came that were going where we wanted. So we ended up taking a taxi back home.